You are at:Home»Uncategorized»Are You an Influence – Or Influenced?
The mother of a childhood friend of mine used to speak about what a bad influence I was on her daughter. It was ironic because back then for the most part I lived my life with somewhat good values and had yet to take the enormous plunge I would ultimately take into total depravity. My friend, on the other hand, was headed for an unbelievable fall of her own. For all intents and purposes, she was probably the worse influence of the two of us. Needless to say, we are all utterly capable of influencing one another for good or for evil, aren’t we? And we are also utterly capable of being influenced by others. And herein lies a question. Are you a good influence – or influenced? 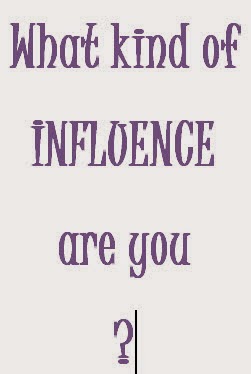 I know a woman who seemed to have a pure heart and a love for Christ who fell into a crowd at her workplace wherein she had a wonderful opportunity to speak to them of the Gospel and to influence them with her seeming faithfulness to the Lord since they did not appear to know much of Him. A year or so later, the crowd around her did not seem to know much of Christ and seemed quite content with living their lives according to their own pleasures and ways. The woman who had had such a ripe opportunity to influence them instead had changed her ways and become influenced by them. She seemed to have rid herself of some of the ways of the Lord and taken on the ways of the crowd instead. What a tragedy for them all. What a loss of opportunity for all of them.

God did not create us to be conformed to the ways of the world. He created us in His image. He created us to be conformed to the image of Christ who is the firstborn of God’s family. When we are born again spiritually by repenting and believing in Jesus as Lord who died on the cross to pay the penalty for our sins, we are forgiven our sins and given a fresh start. We are delivered from the wages of sin which is death (Romans 6:23) and eternity in hell, and reconciled to God and promised eternity with Him in heaven instead.

But this spiritual new birth is but the beginning. We are called not to just believe in Jesus. We are called to follow Him. And as followers of Jesus, we must turn away from the influences and temptations of the world that once held us captive and to turn unto the living God and the Bible and to live as He teaches us. Rather than be influenced by the world around us, we should share the Gospel with the world around us and influence others by our commitment to Christ.

Are you an influence – or influenced? Is it time to make a change?

Rom 8:29  For whom he did foreknow, he also did predestinate to be conformed to the image of his Son, that he might be the firstborn among many brethren.

Rom 12:1  I beseech you therefore, brethren, by the mercies of God, that ye present your bodies a living sacrifice, holy, acceptable unto God, which is your reasonable service.
Rom 12:2  And be not conformed to this world: but be ye transformed by the renewing of your mind, that ye may prove what is that good, and acceptable, and perfect, will of God.

2Co 3:18  But we all, with open face beholding as in a glass the glory of the Lord, are changed into the same image from glory to glory, even as by the Spirit of the Lord.