You are at:Home»Uncategorized»Gas Station Style Obedience
God honors obedience, and today I received yet another reminder of this at none other than a rural Georgia gas station where I had returned for the umpteenth time in my ongoing efforts to trap a dog hit by two cars over a month ago. This time, despite yet another failed attempt to trap her, I did not throw a two-year-old temper tantrum. Instead, I placed my trust in the Lord, relaxed, and kept my spiritual eyes and ears open for whatever the Lord might want to do. Given how many times I have been led to return to this gas station two hours from my home, I was already convinced God is up to something more than trapping a dog. My opportunities there have been endless, and today He surprised me when He brought me an unexpected, big blessing. 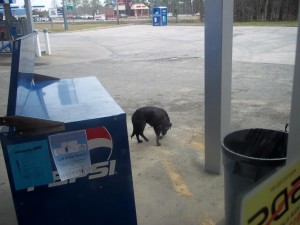 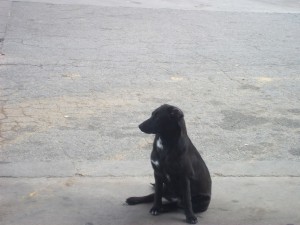 For anyone following the story of trying to trap Grace, let me say this. I am not alone in repeated failed attempts to trap her. She was hit by two cars six weeks ago, and countless people have tried to catch her. I, myself, have prayed, cried, been confident, been fearful, repented, had a tantrum, set up a trap with yummy bait, used a rabies pole, chased through the woods after her, sat down on the ground to lovingly lure her, talked baby talk to her, and sedated her with enough medication to sedate a dog FOUR times her size. All of this to no avail – so far. So suffice it to say God has a plan in all this, and if nothing else, He is using this elusive beautiful, young black Labrador mix to keep me coming back. For what purpose? I don’t know, but today I received a blessing in the most unusual way.

One of the times I decided to take a peek at Grace by walking outside of the gas station building to see just how sedated Grace was, I figured I would go to my car rather than toward her to avoid scaring her. When I opened my car door, I saw my Bible and figured I would take a quick Bible snack. I opened the Bible to Isaiah 58, to which God had led me through a friend yesterday. Somewhere during my quick reading, I heard the Lord speak to me.

“Close the Bible, and go back in the store,” the Lord said.

“Oh, please,” I thought to myself. Why would God ever tell me to shut my Bible? If the truth be known, I was feeling guilty for not spending much time with the Lord before I left in the morning. At least I could have these few minutes trying to “catch up” with my usual morning time with the Lord.

However, I had distinctly heard the Lord speak to me.

In all honesty, I delayed my response to the Lord’s instruction. But alas, I knew I needed to obey. Really, though, could this be God telling me to go back into the gas station where all I would do is continue to eye the racks of candy and chat with the station manager?

I didn’t know the answer, but I decided to obey anyway. For anyone who has chosen to follow Jesus, it becomes quickly apparent in doing so that God’s instructions often do not make sense to our human minds. Nevertheless, obedience is exactly that. Obedience. Obedience is not conditional on what does or does not make sense. Obedience is about our love and service to the Lord.

Alas, I shut the Bible and headed back into the store. Within five minutes, a man walked through the door with a black t-shirt that had a large purple cross on the front of it. When he exited not too long after, I casually made a comment about how I liked his t-shirt. I also, as I love to do just about wherever I go, said, “God bless you.” He made a quick comment as he walked out the door, and I believe I said to him, “Praise the Lord.”

Not more than 30 seconds later, he re-opened the door and walked right back into the store. He immediately started a conversation, and within five minutes took me by the arm to a quiet part of the store and told me he needed to pray for me.

This brother in Christ and I, both of us complete strangers to one another, stood  holding each other’s hand as he prayed his heart out for me. He knew just about nothing about me, yet through the power of the Holy Spirit knew exactly what to pray for me.

When he was finished, I felt like a battery fully recharged – recharged with the love, mercy, and grace of the Lord God almighty. I felt revived, refreshed, and ready for whatever the Lord had in store for me as I continued forward in following Jesus.

How did this brother in Jesus Christ and I part ways? We hugged one another, and said, “I love you.”

“Do you know something?” I told the man before he left. “I was reading my Bible in my car when God told me to shut it and come back into the store. I couldn’t understand. It didn’t make sense. But I obeyed. And look what the Lord did!”