You are at:Home»Uncategorized»Marvin Heery: Serving the Lord With All His Heart
A friend of mine is facing eviction today for the second time in two weeks, but in a nation riddled by evictions and foreclosures there is something refreshingly, and phenomenally, different about my friend’s impending eviction. His eyes and heart are not consumed with the eviction; they are consumed with the Lord. And not only are his eyes and heart busy with the Lord, but he is truly busy about our Father in heaven’s business.
For my friend, who could be homeless in a matter of hours or days, or perhaps weeks, is too busy helping homeless people in inner city Savannah, GA, to be worried about where he will live in the coming days, weeks, months, and years. He has not only entrusted his future to the Lord; he has given his eyes, his heart, and his hands – and his time, his care, and his energy – to forming a coalition to help end homelessness in Savannah. 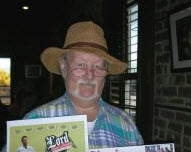 He could clearly get a full-time job. He is gifted, and it is obvious. Yes, he could get a full-time job with benefits, and he could get himself a luxurious home. And he could live a luxurious life. But he lives a life of walking by faith instead. Faith in God. Faith in God’s will for his life. And it is clear to me the Lord has not called him to a full-time paid job right now. But God has called him to a full-time job – loving and serving the Lord with all his heart and helping the huge homeless population in Savannah. The job God has given him does not pay with a weekly paycheck, nor with the typical benefits job seekers hope to have. But my friend is not seeking money and a retirement fund. He is seeking a life of faith, love, and obedience to our King.

Just last week on the very week the threat loomed for the eviction notice to be posted on his door, he was so busy organizing a meeting of faith-based organizations, public officials, individuals, and the homeless themselves that he sacrificed much of the time and care he could have been figuring out the details of where he would live once the eviction would come.

Instead, he poured his heart and soul into organizing a large meeting of people ranging from Christians to Jews, to a homeless veteran to a woman who lives in an RV traveling the nation to document stories of homeless women and kids, to the mayor pro tempe of Savannah, to a police officer with a soft spot for the homeless, and others. The meeting did not result from a long time of planning. The meeting resulted from a mighty move of God through my friend’s love, dedication, and diligence in seeking and doing the Lord’s will.

What stands out the most to me about my friend is not watching him on Sundays moving through the crowd of a homeless outreach giving out hugs and encouragement. Nor is it the time and energy he expends helping to end homelessness. Nor is it that he has been chasing a dream and vision the Lord planted in his heart two years ago to help the homeless. It is not uncommon for me in the ministry work I do to see people who serve in this way.

But what stands out to me is in the midst of his own hardship, nobody would know.

For as he stood with his usual kindness introducing speakers and explaining the vision to the crowd of people attending the coalition meeting, he did not a single time mention the eviction notice so close to being delivered.

He did not stand in front of the crowd with pity, with complaining, with bitterness, nor with a selfish motive to turn the meeting into an opportunity to obtain help for himself. My friend already knows he has the hope he needs because he has the Lord. In fact, he reminds me of Moses. Moses embraced the vision God gave him and threw himself into leading a people in bondage out of Egypt. Moses did not expend his energy seeking manna for himself and bypassing what he was called to do for the Lord and others. Instead, he focused on the Lord and helping others with their own needs. Like Moses, my friend trusts the Lord as his provider – and as the provider for a world in need.

As our nation continues in its sufferings as Egypt endured its sufferings, my friend dedicates his life to loving the Lord and helping to lead the homeless out of bondage – and into the home of the Lord, and into housing provided by Him. And even though he does not know how the Lord will provide his manna for today to keep him in his home, or to provide a new home, he continues to sacrifice – to lay down his own life, his own needs and desires, to make sure the world around him, specifically the homeless, receive from the Lord their provisions – and most importantly the love of the Lord.
I can tell by watching him his trust is truly in the Lord. I praise the Lord for my friend – for inspiring me, for teaching me, and for walking with the Lord at this level of faith. I thank God for this brother in Christ of mine.
If you would like to learn more about my friend Marvin Heery and the incredible work he is doing for the Lord, please visit:

If you would like to talk to him directly about the work he does or to make a donation to help him stay in his home while he continues to help the homeless, please use the following contact information:

Just hours after publishing this article, I learned from my big brother in Christ Marvin Heery that the Lord provided through a reunion with a friend he had not seen in a half-century most of the provision necessary to avoid eviction and maintain his rental home for another month. In the typical fashion of my friend, he was more thrilled with learning how his long-ago friend could help with his work helping the homeless than he was to learn of his own eviction being avoided.

I ENCOURAGE YOU to consider opening up your hearts to PRAY and perhaps to DONATE to help Marvin Heery to continue to live indoors to maximize his ability to continue his work loving the Lord and serving a population of people in dire need.