You are at:Home»Uncategorized»THANK YOU BILLY GRAHAM
So I’ve just jumped in with both feet – and an eager heart – to read the soon-to-be-released, somewhat one-of-a-kind book called “Thank You, Billy Graham: A Tribute to the Life and Ministry of Billy Graham,” published by Barbour Publishing, Inc. and Shiloh Run Press and co-authored by Jerushah Armfield, Aram Tchividjian, Basyle Tchividjian. And I can honestly say I’ve jumped in deep enough to be able to give it a solid preview, if not review. The book is not only somewhat unique, but it is also daring. Of course, regardless of the countless reviews it will likely receive, it should undoubtedly get a strong readership if for no other reason than the world-renowned preacher Billy Graham is its primary subject. And that, speaking of Billy Graham as any review of the book will most obviously do, is exactly where it is both unique and daring. 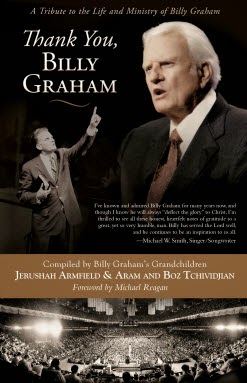 On the unique end of things, how many books about well-known preachers are actually a tribute to the preacher himself? This somewhat off-the-beaten-track book, at least when compared with the numerous books penned by Billy Graham himself, is not a book by Billy Graham. It’s a book for Billy Graham, or at least that’s what its title suggests. Nevertheless, rather than the authors themselves writing a tribute to Billy Graham as he approaches his move to heaven given his 90-something age, his remarkably well-lived life, and his health issues, the authors along with undoubtedly the help of the publisher, have compiled a book full of letters and notes sent in to his ministry chock full of accolades for Billy Graham.

The numerous writers of the letters, including family and strangers alike, including people from near and far, share in loving, grateful, endearing, warm and often transparent detail how his work has touched their lives. The letters writers not only speak of themselves, but they tell of how Billy Graham’s lifelong preaching ministry has touched countless other lives in a domino effect through their lives – sometimes even through multiple generations. Some of the writers impacted by his ministry ended up becoming preachers themselves, thereby effecting numerous other lives. Isn’t this the Great Commission in action? Isn’t this exactly what we’re all called to do? How many books are written as a thank you to a preacher, while simultaneously revealing to the reader how true discipleship is meant to work? Unique, eh? And daring.

Daring? Certainly. Along with countless other qualities Billy Graham is well renowned for, one of his greatest traits without a shadow of a doubt is his humble adoration of the Lord God almighty and his relentless pursuit of telling the world about the Gospel of Jesus Christ. So what then is daring about this book? Billy Graham would be the last person in the world, most likely, to want to receive any accolades when his number one goal for decades is to help lead the world to faith in Jesus Christ. So what’s daring about the book, then, is that it could easily become a platform for the focus and attention to fall upon Billy Graham rather than Jesus Christ. In this respect, it certainly is daring.
Nevertheless, though I have only just begun my little journey into the book, I can easily see that the book is far more than merely a loving pat on the back of Billy Graham. Time after time, in letter after letter, people from around the world tell of how the Lord has used Billy Graham literally in generations of their families in helping to lead them to a saving faith – and relationship – with the Lord. So while Billy Graham certainly receives his fair share of praise, the point of the book does far more than merely shed light on the wonderful work of Billy Graham. After all, Billy Graham’s testimony is really not about himself, is it? It’s about his dedication to proclaiming the Gospel of Christ to the entire world. So who gets the ultimate glory? The Lord.

Besides being somewhat unique, and certainly daring, the book accomplishes even in the small amount I have read thus far an interesting feat. It inspires. Oh, of course any book about someone as inspirational as Billy Graham would certainly inspire. But the way in which it inspires for someone like me – and hopefully numerous other readers – is that it demonstrates through the countless true stories of how God used Billy Graham to help transform lives how God can use a single person. Because, truly, this is what Billy Graham really is. One simple, humble, human. He didn’t have an extraordinary background, to say the least. Not before he began his preaching ministry, and certainly not after. Sure, he might have traveled the world. And he might be a household name across the nation, and well beyond. But his message has never been fancy, and his message has never changed. Has it? It’s the plain, simple, unadulterated message of the Gospel of Jesus Christ.

So how then does the book inspire, particularly when it could be perceived as one long thank you tribute to Billy Graham? Quite simply, the book can easily make one ask oneself – could this be me? Could I do this? Could I be so yielded, so submitted, so surrendered, so devoted and dedicated and committed – and humble – to the Lord God almighty that God could use me to build His Kingdom? The stories in this book, at least what I have read of it so far, are not frilly and fancy. They are simple and humble – and full of thanksgiving. Thanksgiving to Billy Graham, and, I hope, above all else, to the Lord God almighty.

For it must be remembered, and I pray it is for anyone that reads this book, that Billy Graham at the end of the day is just that. Billy Graham. Nothing more, nothing less. A mighty man of God, without a shadow of a doubt. But Billy Graham has not walked this earth for these nine decades for the purpose of stealing the Lord’s limelight. He has, in fact, let his light so shine that the Lord would be glorified through his life. My prayer for anyone who is led to read this book is that thanks and appreciation most certainly be made to Billy Graham for all he has given this world in the Lord’s name, but that above all else the glory be given to the Lord. And it is my hope that readers would be inspired to give their lives to Christ – not just as believers, but as true followers. And, as true followers, that they might do as Billy Graham has done. Love. Serve. Proclaim the Gospel to a lost and dying world. And give God all glory.

“Let your light shine before men in such a way that they may see your good works, and glorify your Father who is in heaven.” Matthew 5:16 NASB

The book is due out in March.
Please visit Walk by Faith Ministry at https://www.walkbyfaithministry.com.