You are at:Home»Uncategorized»Cone Heads – Latest Scoop on Our Newest Dogs 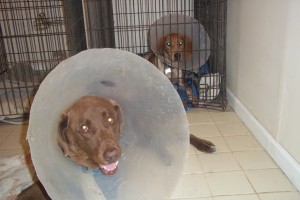 Praise the Lord! Joshua (pictured in front) wore his collar for about 6 or 7 weeks following major surgery to remove a massive tumor. He was rescued from euthanization at a SC shelter, flown by private plane to Hilton Head, SC, and had surgery shortly thereafter courtesy of an anonymous family that donated his operation. Though he has other tumors, including a sizable, hard one on his chest, he is excited to continue his new life – minus the cumbersome ice cream cone collar and minus the enormous tumor that made walking more than difficult. He has a somewhat challenging time walking due to age and other issues, but he could not be happier and plans to fully enjoy his new life.

Esther, pictured in the back, shared the “hospital room” along with her ice cream cone collar, following routine spay surgery shortly after arriving into the fold of Walk by Faith Ministry. Unlike Joshua, who was left at the shelter by his family who was moving, Esther never made it to a shelter. She was found abandoned – and super, super skinny – by somebody who was bound and determined not to take her to the shelter where she would face almost certain euthanization.

Now that Joshua has just had his collar removed, Esther is excited to be set free as well. Neither one minded posing for the photograph – a small price to pay given the new lives they have been given!